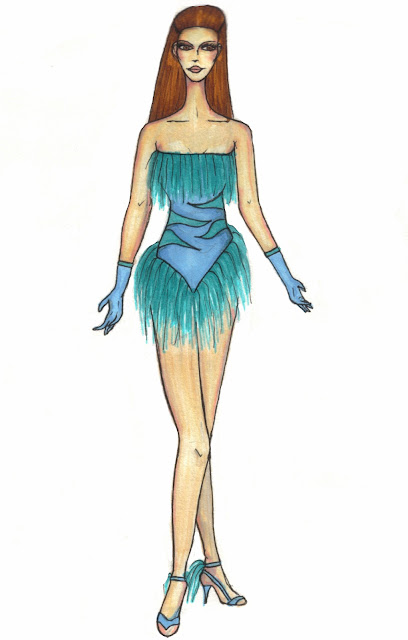 OK ,I know﻿, I'm a bit obsessed with these strictly come dancing inspired designs, but the good news is there's only one show left and then a Xmas special so hopefully I won't be doing many more of them, which means I'll have to find something else to inspire me, but don't worry I've already got something in mind!
With this one I wanted to use feathers in a showgirl kind of way so I went with the long thin wispy type feather fringing (I'm not sure what its called- any Ideas?) and the colours were inspired by the sea- a strange combination -I know, but I think it works, for once I've layed off the diamante and with this one I've tried to concentrate on giving her face a bit more depth with a little shading.
The only problem with this is that on paper I'm really pleased with it and I think its one of my best ones, but when scanned into my computer the skin tone and head/ face area look really harsh and streaky its like the scanner has picked up on the blended colours and separated them. even though I've tried to tone it down it still looks harsh one way or another .... ah the joys of technology, but my scanner seams to have come from the prehistoric ages so maybe its time to buy a new one???!!!
Thanks for looking x
costume design strictly come dancing