on December 17, 2010
One of the reasons I first started this blog was to keep up to date with fashion design and see what old and new designers are doing, but I feel I've been neglecting this part of the blog so from now on I'm going to try and make this a regular feature.

Emma Cook.
A British designer who's been producing collections since 2002. In 2008 she did a capsule collection for Top Shop which she was highly praised for.
Her collections are often based on a fictional character who she imagines traveling the world and through time. Cook likes to use print in her designs some of which have been done using hand painting techniques. 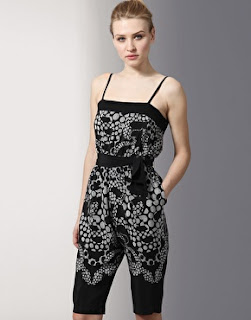 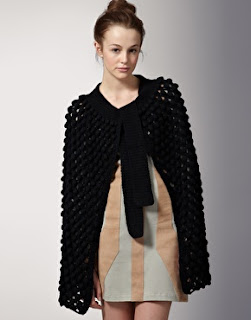 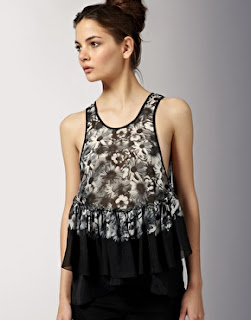 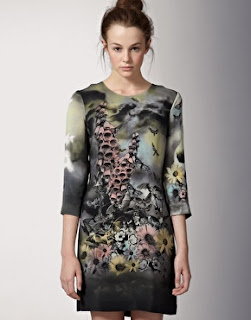 This is part of her Asos collection, I love the prints she's used especially the one on the bottom right its quite Erie with the dark pastel tones and I really like the one next to it with a mixture of black,white and grey tones its an unusual spin as I'm so used to seeing just black and white being used.
How cute is that pom-pom cape, its given me an urge to have a go at making my own -don't think it would be as cute though.
And that jump suit, it's an absolute steal at £75 down from £235.
To see more visit her website

A recent graduate from London's central saint martins. She completed her MA achieving a distinction. and was selected for the prestigious central saint martins catwalk, part of London fashion week. she has also worked for designers such as Jeremy Scott, John Galliano and Giles Deacon. With that back catalogue she should have a bright future ahead of her. 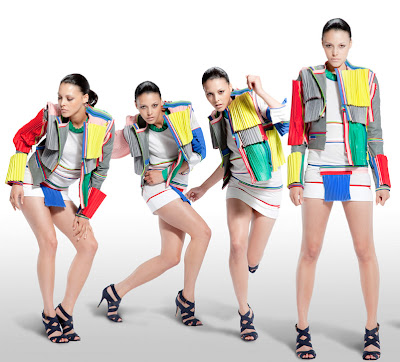 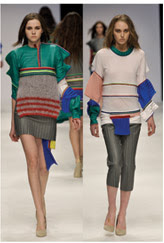 These designs are taken from her MA collection. She has incorporated clever pleating and folding techniques. The inspiration came from Lego and allowed her to use contrating panels to create a patchwork effect. Interestingly the pleat's and folds exaggerate the frame and movement, collapsing and bouncing as the person moves.

This is an interesting contemporary collection and a clever way of manipulating fabric. I am intrigued to see her future work as I think she has a unique technical ability with fabric.
I also chose it as its a colourful collection, which is nice to see as all I've been doing is selecting a lot of black lately!! It must be this winter weather having a drab effect on me lol!

Which collection do you prefer? Are there any new up and coming designers you like or would like me to feature?