on November 26, 2011
The feeling of not having a sewing machine must feel similar to that of not having a car I guess, though I don't drive (but I really should). I hate being with out my sewing machine! I come over feeling all sullen and moody just because all I want to do when I've not got a machine is sew!!
For some time now my sewing machine has had the grumps, sometimes it's OK, sometimes it's not. Quite frankly it's been pee-in me off in a ever growing way. I actually have two machine my main machine (an E&R Classic) and my back-up (Hyundai) and once the back-up started playing up as well, that was it, I snapped, so I gave in and bought myself a new one!!! 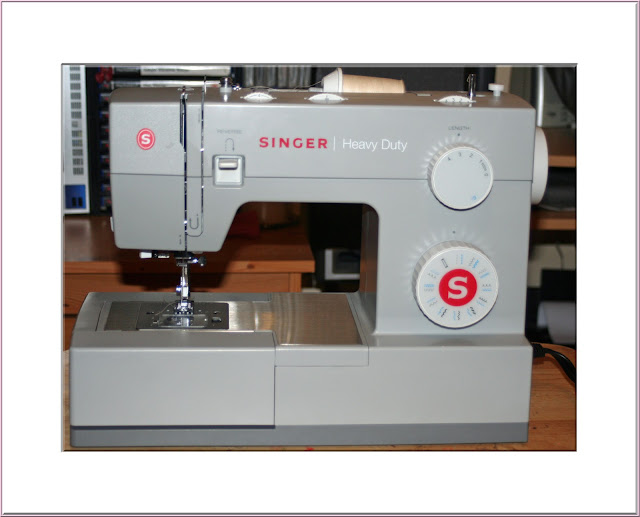 The singer sewing machine has got all the things I want. It's suitable for thick fabric as well as handling the flimsiest.  It has a complex feed dog system which makes the fabric glides through,it can apparently 'senses' when extra power is needed (for thicker fabric)  cleaver machine!! This is also the first sewing machine I've owned with a thread trimmer, automatic needle thread-er and seam guides all in one!

The machine works lovely although there was a slight miss-hap when I first used it, I switched it on, and there was light,  I pressed the peddle and there was nothing!! Again I pressed and I pressed and I pressed, absolutely nothing!!
Feeling really frustrated that I'd ordered a new machine and would have to sending it back,  I skulked off to my room telling my dad it wasn't working as I went, by the time I'd reached my room there was the whirring sound of the machine. Delighted I run back down the stairs a dam sight faster than I went up them to see it working perfectly. Apparently I hadn't, Ahem, plugged the machine in properly! Well I did think the cord in to the machine was a little loose!!

Naming my Machine
This is an interesting topic, do you name your machine? I never did until a friend named hers, then I took to calling my old machine, wait for it, Shitty!! Yes Shitty, the machine turned out to be pretty reliable considering all that I put it through. So what if it didn't have a thread cutter or hem guide, that's nothing that a pair of snips and a bit of masking tape couldn't fix!!

when I got my over-locker I took one look at it and it became Franck, with a C as well as a K, something about the machine reminded me of the the French footballer Franck quedrue, (I am a massive football fan.... well I do have to have another hobby different from sewing to keep me sane!!) and so the tradition of naming my machines after footballers began. Not long after I named Franck, shitty had a new name, Eric after Eric Cantona, just like the footballer the machine was temperamental and awkward, but when it does work it, it really works!! next came my back-up machine, partly computerised but noisy and clunky, I couldn't decide if I liked it or not so it became Stevie G, after Steven Gerard, as I feel pretty much the same about him as the machine!

Onto the newbie , I'm having a right mare trying to name this one, nothing suits it, but for some reason I'm inclined to call this one Stevie too, or maybe Stephen or perhaps Carr or even Carr-y after Stephen Carr, who is muscular and been around for a long time and can still out do the younger ones, which is what I'm hoping this machine will be. Wish full thinking, ehh?

So do you name your machines/ how do you choose a name?

Have a lovely weekend!!

p.s I've had the machine a week, He's already altered a pair of curtains and a pair of trousers, made a cape toile Twice and sewn a top with pleating!, more about the cape and the top next week......