on December 29, 2011
In my eagerness to give the fur jacket a whirl in last months burda magazine number 113, I bought some fur material (fake of course) over the net, the material was originally to make my boyfriend the fur cushion he'd requested as a Christmas present  so I thought it wouldn't hurt to order enough for the cushion and the jacket too.
The problem being at only £7.99 a meter of which I'd ordered 2 meters it was suitable enough for the cushion-just about but not really for the jacket!
The material was effectively what I would call 'fun fur' you know the type you would make fancy dress out of, not coats! but as I'd already cut out the pattern and had too much fur material to know what else to do with it I went ahead and made the jacket secretly hoping the fur would like nicer when it was made up.

The fur jacket was a feature in the magazine so it came with a four page spread of instructions and pictures. It's comprised of 5 pieces and the sleeves were a two piece raglan style, overall it was easy to make and assemble, it doesn't have a collar or fastenings either so there was no faffing about with anything, other than two bust darts.
The fur was easy to sew, but fiddly and messy to cut out, you have to cut out one layer at a time so no folding the fabric in half like you usually would, this means that you have to cut each piece twice, once with the pattern the right side up and again with the wrong side up, which I obviously forgot to do!!
luckily I had enough material, so I cut out the sleeve and front again at which I made another mistake by rushing and cut the fur with the pile going in the opposite direction to the other pattern pieces- I knew this project was doomed!!

Thankfully, the jacket did go together like a dream, I enjoyed making this as it was an unexpected project, I'd never considered making a fur coat before, and I'm now desperate to make another one, this time out of proper (fake) fur coating material which I have spied at this website and at croftmill too. 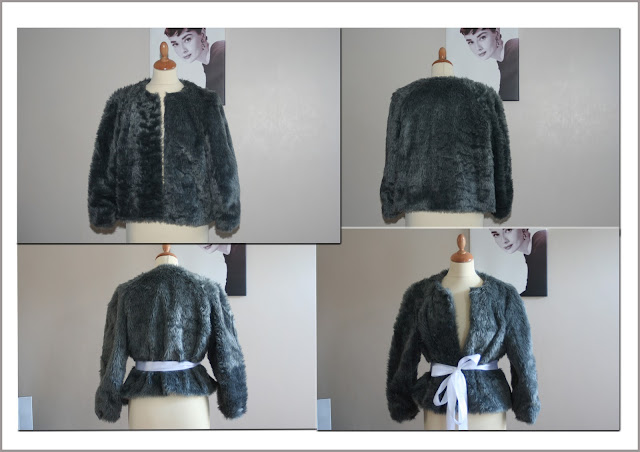 Front and back views

Although this hasn't got any fastenings I think I would add one next one I make it, either a fastening at the top of the coat or use a ribbon as a belt, as in the picture, which pulls the jacket in nicely and adds shape which I find it looks better on me as I'm fairly Petit.

This is how the coat looks on me, I'm not too convinced as I can only see as far as the fur which put's me off, the sleeves are meant to be 3/4 so these need adjusting next time, and either the jacket needs taking up or lengthening an inch or so, I would probable go with lengthening it so I could add a ribbon belt. 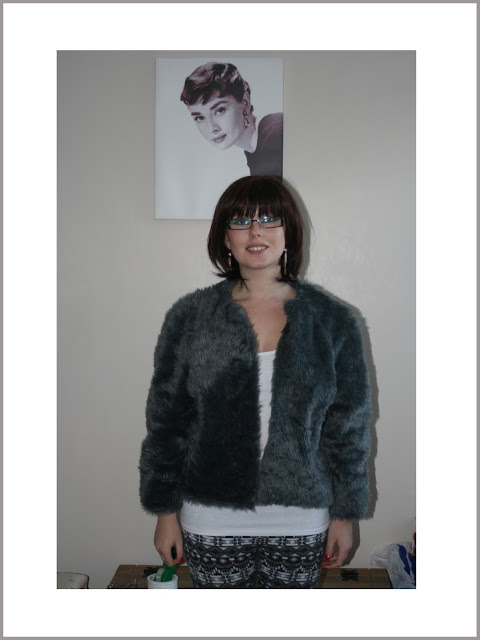 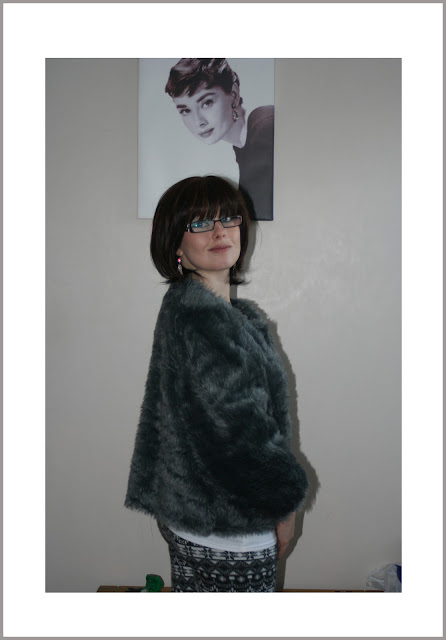 The back looks baggy at the bottom so this would need adjusting too but it fits well at the shoulders.

on a side not it's also lined with pink lining material. It's a pale pink and I think it complements the grey fur nicely.

I don't think all has been lost, the jacket acts like a muslin/mock-up seen as I didn't make one to begin with, so it's allowed me to see where to make adjustments, and although I wouldn't wear this out as-such I may don-it if we have snow to walk dog and on the other hand I may wear it round the house too when I'm feeling cold so not all is lost with it.
burda fur sewing