How To: fashion sketching

on January 06, 2012
so much for a productive start to 2012! I've come down with a cold so I'm feeling somewhat lethargic and not really in the mood to sew, so I thought I would leave you with a diagram and a video I found about learning how to draw fashion figures. It uses the same method that I used when I first started drawing.

Generally to draw fashion figures you use either a 9 or 10 head rule (see diagram below). This is based on the human head fitting in to the length of the average human body approximately 8 and half times but for fashion drawing you use either the 9 head rule or the 10 head rule where by you lengthen the legs so it's more ascetically pleasing and 'fashionable'!

To achieve the 10 head rule each section is broken up into equal measurements, using an A4 pieces of paper I  space each section around 2.5cm or 3cm apart and then lightly draw in the figure before giving it clothes , shoes hair and a face although some people prefer to design clothes without the distraction of facial features or the hair. 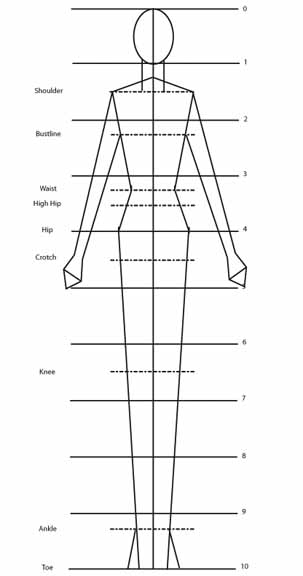 As you will of noticed there are also dashed lines as well as solid ones, it is best you draw in the solid lines first before marking the dashed ones as not to confuse yourself. The dashed ones represent the shoulder, bust, waist, high hip/ hipbone, crotch, knee and ankle.
Then note that the shoulder, high hip, crotch and knee are all roughly half way between the solid lines.
The bust, waist and ankle are only around 1/4 between the solid lines, and there you have it the basic out line on which to begin drawing.

If you want to advance things then watch the video below, it uses the same method to the one above but shows you how to move the figure into more of a pose.

The quality of the video isn't the best but you get the idea.

fashion drawing how to Illustration sketches