on April 11, 2012
you'll have to excuse my toiling abilities in these photos, I only have one sleeve attached- I blame college for my bad habits!!! You may wonder why- it was because we worked to strict deadlines we used to only toile with one sleeve, perhaps no facing and with pockets only drawn on, just to save time which ment we had longer to sew the actual garment, our tutors also use to check our garments thoroughly and would root out any major flaws so they could be amened. (only at college level hey!!)

I don't always toile but I though it would be a good idea as I've never made a coat before so it would be like a trial run I guess?
The material I used to toile with was given to me it's been in my stash for a while and I have no idea what to make with us and because I need to run my stash down using it as toiling material seems like a good option. I think it's twill which is a good thing as it's similar to the actual coat material I will be using.

The front facing turned the front  hem allowance up but in my lazy-ness I didn't bother sewing the back of the hem, so that's why it looks a bit up and down.

The side view (excuse my non enthusiastic look)

The Fit:
I cut the smallest size on this pattern which was a 10.It  fits fine over my bust and the shoulders but the waist looks a little baggy and even though it will be pulled in at the waist with a belt, I've decided to take the sides in a fraction.

The length:
This is way too long for my liking, I will be shortening it to around 4cm above my knee.

The sleeve:
Unusually the sleeve, which is not hemmed by the way, looks to be about the right length, result- I would have expected it to be a bit on the long side.

This coat has welt pockets,  something I've never done before so I thought I would give them ago on my toile. The first one went a bit wonky but in my defence the instructions that came with the pattern contained no diagrams only text and left me a bit bamboozled, as it turned out I was heading in the right direction and I completed the second pocket successfully. 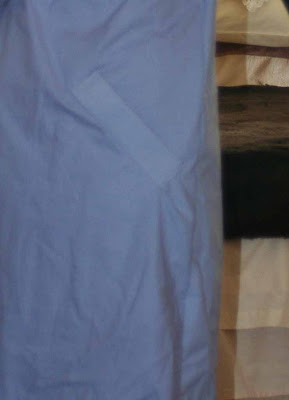 Choices:
I'm undecided weather to pipe the coat or not? It wouldn't be all over, just down the front, on the storm flaps and around the sleeve straps. button choices are also driving me nuts too, I must of spent well over an hour and half on sunday searching ebay for buttons, originally I was going to go for black buttons as the coat itself will be a beige/stone colour, but I think that maybe brown or a tortoise shell patterned buttons would look more expensive on beige than black? what do you think?

Also this trench coat hasn't got a full lining only front facings so I'm going to attempt to line it too!!

one other note is that I'm not quite sure when I will start or finish this coat as I'm away next week then I start my new job straight after I come back so time is really not of the essence but I hope to get it done before the start of summer (fingers crossed that is)!!