on September 03, 2012
I've been glancing, this darling of a Gucci flora, perfume Ad since I first spotted it, in May's edition of Elle magazine. Isn't it gorgeous, So you know what,  I had to draw it!! 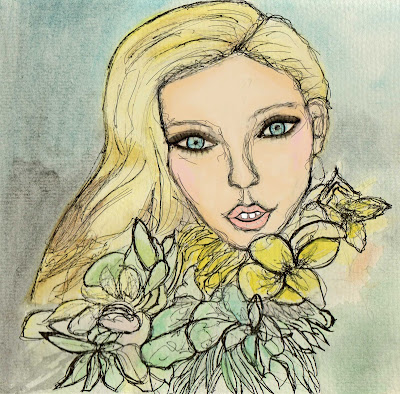 I'm still experimenting with a more sketchy style of putting pen to paper, but the flowers in the advert just yearned to be painted using watercolours, a medium that I haven't used for quite some time.

Normally I would conceder a sketchy style too harsh combined with watercolours (personal taste), but haven done this myself I think it gives it more of an edge! It's an interesting combination any how and one I hope to do more with.

* although watercolours were the main meduim used, I felt her  face was too pale. After doing the outlining I decided to darken the face, only the outlining run, (seen as I was using watercolours that was naturally going to happen- duh)  making it blotchy, grey and dark. In the end I corrected the face colouring using photoshop!!
Moral of the story, only outline when you'r 100% happy!!
flora gucci Illustration watercolour