on February 14, 2013
I think I have a love affair going on with stripes, it's the third fabric in a row that I've sewn which is striped. Any more and you'll think I have a problem ;)

This is the first time I've sewn with knitted fabric. Initially I was thinking a dress as I'd bought two meters, but I'm not great at wearing dress's and a slightly lack lustre sewing day resulted in flicking through back issues of Burda magazine and coming across what they titled a ' t-shirt' which is what I would call a fitted top.
The top it's from Burda issue 10/2012 pattern number 114 A suitable for use with knitted fabric and something I knew I would get more wear out of than a dress.

As most of you are aware Burda tend to show you all these lovely patterns but then present you with a mass of lines which are impossible to figure out. Luckily this was a featured pattern in the Burda magazine so the pattern was only half as hard as it normally is to trace as it was highlighted in pink!

The pattern was really quick to sew up although the the gathering on the front is actually in the form of a curve on the pattern, which was interesting, and had to be gathered in two parts!

There were a few down sides. It wasn't until I started placing the pattern pieces on the fabric that I realised this pattern isn't suited to stripes. The problem comes to light when placing the front pattern piece down on the fabric. The severity of the curve on the pattern means that the shoulder are actually lying vertical instead of the more common horizontal position. Not deterred, I carried on.

I actually enjoy it when pattern placement like this happens as I'm eager to see how it will finally turn out! Surprising the stripes on the right side of the top do line up from the waist down (it can only place from the waist down because of the grain placement on the front of the top) On the left side (as you can see) they don't. I did try but as I mostly sewed the top together with the overlocker, I didn't have the patients to unpick it.

The shoulders are also a little loose and a bit wide. And although I added an extra 4cm on to the length to make it more of a tunic it could of done with another 3cm. 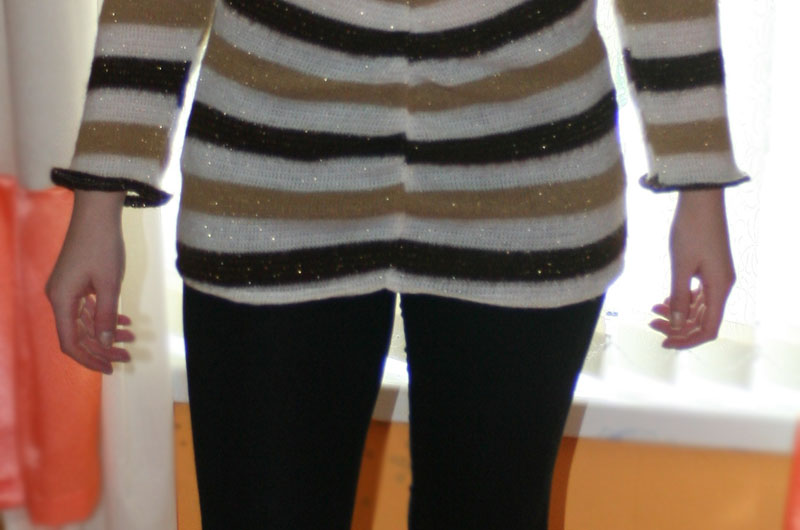 The down sides stated above don't really bother me. What does is the the hem on the sleeves. you've probably noticed on the image above that they have completely lost their shape. I'm not really sure why this is but it probably has something to do with me stretching out the hem as I was sewing :( I also noticed that this fabric was a very loose knit and any small amount of pulling on an unfinished edge meant the fabric just started to unravel with out any effort at all :(
I also think I should of used the stretch stitch feature on my sewing machine for sewing the hems.

Out of all the things stated above I do love this jumper. I really like how it fits me, I love the fabric design and I think I'm going to really enjoy sewing with knit fabric. It's more 'me' for everyday wear.

Difficulty: Beginners. It's a featured pattern in the Burda magazine so all steps are clearly explained and illustrated.

Time: Around 3-4 hours from tracing pattern to finished garment.

wearabilty/make again: Definitely an everyday item. Although the v-neck could be seen as a little low but nothing a cami worn underneath wouldn't sort. I would make this again using in a plain knitt as I think it's something I would wear often.