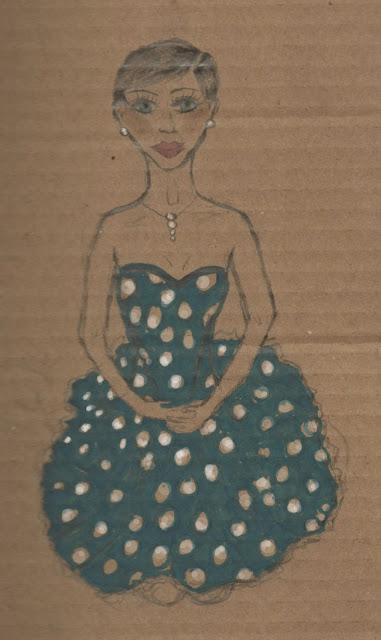 When quite in work, girl will sketch -  on a piece of cardboard!

That's what happened after I came across a highly sharpened graphite pencil, which looked like it was itching to be used. I haven't used a graphite pencil since college and the urge just took me!
one of the perks of my job, which can also be it's downside is that certain days I'm on my own and when it's quite it also becomes boring so I usually counteract it with being creative, last week I thought I'd try out sketching on cardboard.

Truthfully I just wanted to sketch on cardboard so the inspiration evolved as I went. I prefer to leave the face until last, but I started first and as the eyes developed I felt a touch of Twiggy, this was followed by the pixie crop and a softer approach. I started to channel Audrey Hepburn. This lead to a pretty prom style dress and the addition of spots came from thinking of mark's lovely spotty dress from the first episode of the Great British sewing bee.

I'm also trying to explore different pose styles and this kneeling position was something that I thought I'd try I' m also intregued by texture and Sketching on cardboard does give a rawness to the image although the ridges are more visible than I'd like, I think textured paper with grain would be more appropriate.

In other news, my sewing machine and overlocker are in my new home, and i can't wait to start sewing again. I think an instant gratification make is up first!!!