Why Lauren should win the great British Sewing Bee 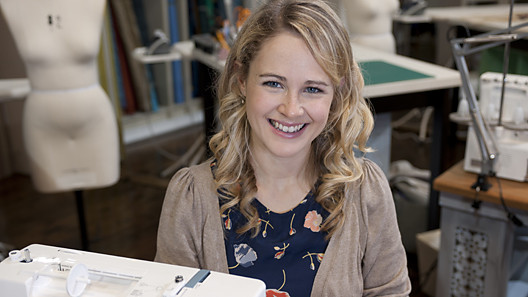 Don't get me wrong I love both Ann and Sandra, their experience at sewing is second to none (and how amazing is Ann for her age!!), but why I would love Lauren to win The Great British Sewing Bee is mainly down to stigma and good image (although she is a very talented sewer too)!

I feel that a lot of people think sewing is only a hobby for the 50+ age group, especially if you sew your own clothes and anyone below 50 who does so must be an odd ball with no social life! (and we all know that isn't true)

When I first started sewing (at 18/19), I kept it quite because of such stigma, my mother however took more pride in what I was doing and would tell people, most of which replied with interest  'oh you like doing that sort of thing do you' or 'Oo that's unusual for a young girl'. I swear they must of thought I sat at home making smock tops.

Strangely when I started studying 'Fashion and clothing' at college, perception changed when I told them the course I was studying, it was mostly meet with a positive effect!
It's interesting when something is given a different name how people can perceive it. 'Fashion and clothing' was simply code for 'sewing and textiles' and you could guess what the reaction would have been had that been it's official title!

Back to why I would like Lauren to win:
Firstly she's young, she's also bright and likeable just a normal young girl who likes to sew. What's more to say than she gives sewing a positive look, that sewing is cool and it's hip and it's ok to be a normal hobby for the younger generation., she acts as a role model like Taylor Swift is to country music.

Ultimately it's not down to just that it's down to sewing ability and creativeness, but I think Lauren wining would serve as a modern 'image' of sewing and in a time where suitability and individuality is become more and more apparent that can only be a good thing!!

And I must say a huge Congratulations to Tilly of Tilly and the Buttons for her part in The
Great British Sewing Bee for not only representing the on-line sewing community but for also showing how far a self taught sewer/sewist can come in only a two and bit short years!

So Lauren gets my vote what about you, who would you like to win and why?