One That's worth a look:

on May 09, 2013
I love things that are off beat and unique and this websiste also combines them with chic. Perfect combination. 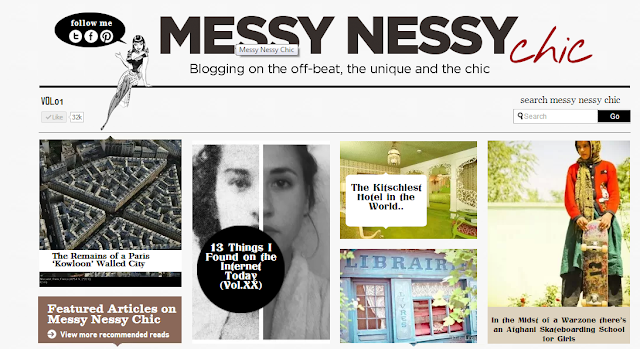 Messy Nessy Chic is my newest fascination in the blog world. This blog completely fascinates me with it's unusual articles that satisfies my thirst and intrigue for knowledge of the off-beat. ( I love it when I find out about unusually situation or beings in the world! don't you?)

Articles that have had me hooked included:

I hoped this has wetted your appetite as much as it has mine, there are even categories to refine your interests such as C'est Chic, don't be a tourist, nostalgia and fashion for dummies to name a few!

Unfortunately sewing is still slow :( I just have to much going on to to be able to fit things in, between working, decorating, moving stuff, furnishing the house and generally being a proper grown-up (i,e having a house to keep in order) everything is taking it's time. I want to do it all so I need to find a routine to settle into but obviously priority takes over and turning this house into a home is top of the list!
I have done some sewing this week, but it's boring stuff- shorting curtains and the like :/ Although I did cut a pattern for a basic loose fitting T-shirt.

Taking part in Me Made May isn't going well at all this week, again clothes/shoes I though I had brought with me have turned out to be still at my parents.

Who ever said this moving house malarkey was hard was certainly right, especially when you have a hobby you despritly want to do!! #sewingproblems