Prom Dress Toile One and Two

The first toile of my prom dress did surprise me, apart from a couple of hiccups it was relatively good! I had visions of dress pattern going wrong as I was trying a few things I hadn't done before such as a neck dart, eliminating waist darts and creating a small train on the back of the pattern

Pattern info....
As per usual I worked from the Winifred Aldrich pattern cutting book, drafting the close fitting bodice block to my own measurements. Then extending the block to make the one piece bodice block. From there I then set about creating the pattern for my prom dress design.
I started by moving the shoulder dart to the neck line and treating it as gathers, reduced the shoulder line for the narrower neckline, took out the waist darts and replaced them by shaping the waist from the sides on both front and back, and extended the hem at the back creating a curve for the train. The zip was placed at the side seam and there was a slight flare to the hem.

The amendments.....
The pattern needed taking in under the arms, I also added back darts to make it more fitted in that area and re-located the zip to the centre back. I took the decision to add more flare to the hem, although this was largely another experiment as the train on the back of the dress was far to short to have been of any effect so I got rid completely to try out the flare, I also lowed the back neckline along with the front. 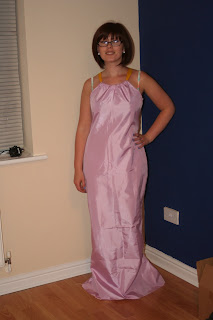 Thoughts....
The addition of back darts was a good idea, and I'm more than pleased with the relocation of the zip, however the the flare on the hem isn't doing what I wanted, I also preferred the neckline at the front higher up, but overall the main alterations, zip, darts and underarm alterations were good. The disappointment with the second toile was the fabric, it had much more body than the first fabric so I found it more boxy in keeping it's shape instead of being flowing which is quite misleading for the shape of the dress which once again proves fabric is key!

Final alterations...
I'm bringing the neckline back up, as I think it looked better as in the first toile. the hem and side seam below the hips will just run parallel to the floor so it's very much a column style dress, and then I think it's pretty much ready to be made into an actual prom dress.

And yep I've decided that although I won't be wearing this dress to the prom I am going to make it :D