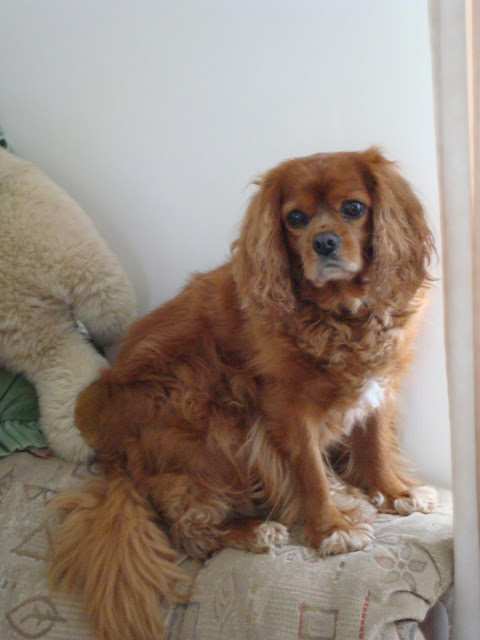 Two weeks ago today and at the grand old age of 13 I lost my beloved pooch Elle (pronounced Ellie). Elle had been ill for a while, she had been having fits for the last 8 months, and the week before she passed she had become quite unwell and receiving medical attention from the vet but thankfully she passed away peacefully in her home.
I had become so scared that she she would die whilst having a fit or not come out of one and have to be put to sleep that I really was relived she went in the way she did!

Elle was the best dog ever!
And I mean it! people keep saying to us 'oh we had a dog, when it died we got another one and we loved it even more than the first one' but for us (me and my Parents) Elle was that dog.

I've always had a dog, when I was born my parents already had Beth our first King Charles Spaniel. She was lovely, but Elle.,Well elle was something else.
We had her from 8 weeks old and I choose her! I choose her for two reasons. The ruby king Charles spaniel is suppose to be one colour all over, but because her mother was a tri colour and her father a ruby inevitably the pups had some white in their coat.
I wanted a pup with the least amount of white, Elle wasn't quite this pup but near enough. She was the pup bounding about knocking the others out of the way and repeatedly after her mother for milk even though her poor mother was completely dry. So to give the other pups a chance or a rest even I choose this one.

Her name is also interesting. I'm actually dyslexic and the fashion magazine ELLE I thought at the time was called Ellie magazine. It was my favorite and the name seemed unusual so that's what I choose it. It wasn't until a few years later that I was corrected on the pronunciation, up until then I just thought Elle was a French way of spelling Ellie!? 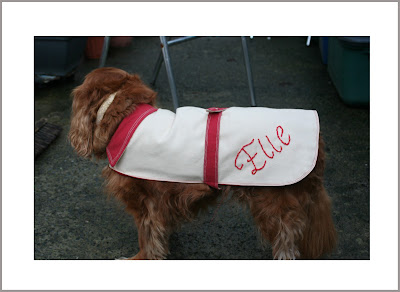 Elle on the reciving end of my sewing!

Elle had always been playful, happy and inquisitive to the point of nosey-ness, not to mention greedy, greedy beyond belief. One whiff of anything food related and she was there! Her tail was constantly waging and even when you spoke to her it would wag as if to say I'm listening. She was a vocal dog to, not in a barking sense but she often made sounds whines, huffs and puffs when she wanted attention, was playing or just when she liked the way you were scratching her. She truly was a unique dog, full of character and zest. 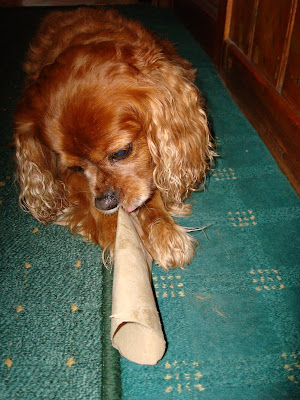 playing with a cardboard tube!

When my dad got a new job and had to get up every morning at quarter to five he thought he'd get the dog into a new routine and take her walkies before he went to work. Now anyone who knew elle knew she loved walkies and if you didn't take her by a certain time she would repeatedly look at her cupboard where her lead was  kept, if that wasn't enough of a hint she would then start with the noises, then a dance followed by barking, Then you knew she meant business (and not in that sense). But her 5am walks were a no-go, she would run to my room, scratch my door like a dog triple her size and insist on coming in so she could go back to bed, and get up at her more sensible time of 6.30-7am for breakfast followed by a walk. 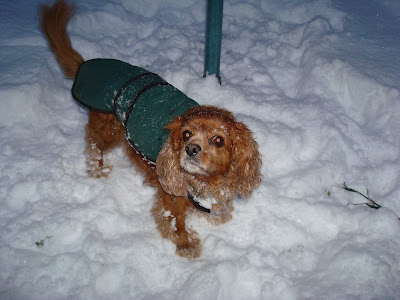 ' Snow is the best, I can practise being a snow plough'

It's fair to say that although I've been living in my own home for 3-4 months I'm certainly going to miss this pooch, she was with me all through my teens (I got her when I was 12) and into my mid 20's she really was a gem, a ruby coloured one! 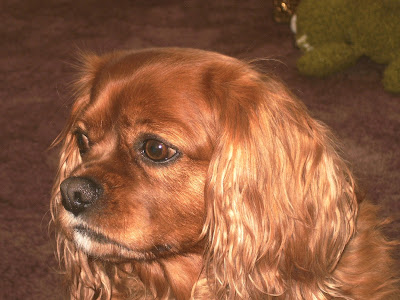 Elle posing whilst I get to grips with DSLR

Elle You were the best dog Ever! Goodnight sweetie xxxxxx