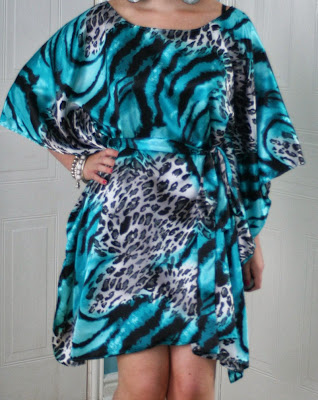 The blurb:
This is a first for me, I've  actually sewn the same pattern twice, *feels forehead, nope fine*. I really liked this pattern which was a freebie from sew magazine, and after sewing up the shortest version I opted to try out the longest, and I love it!! It's not without fault but I did succeeded in neaten-ing out the neckline.
You can read more about the shorter version, here which has pattern links too!

The pattern alterations:
I changed the neckline to a deeper curve which I'm happy with but I should of known better and graduated it out from the shoulders instead of doing it all the way around. Having a Petit frame means I struggle with garments being too wide at the shoulders at the best of times, talk about text book error! Although I did achieve a neater neck line which I put down to careful cutting and equally importantly stay-stitching the neckline to keep it's shape.
Being a little shorty I had a hunch the dress would be too long for me but rather than try to second guess the pattern I went with the fabric length recommendation, I was right, And took a whopping 10" off the hem. The dress was also too long in the sleeve which I was surprised by as I'd already shaved a good 3" off to create the belt. After taking another 4" off the sleeves they sit around elbow length, which I'm happy with.
My bug bear was not testing the button holes out on a scrap of fabric first, this resulted in a lot of unpicking, and a bunched up lumpy looking one, but at least the second one is neat a tidy. 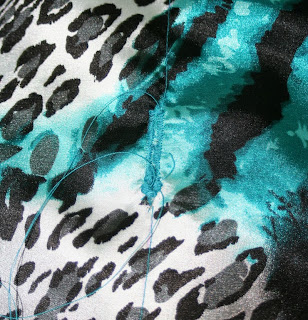 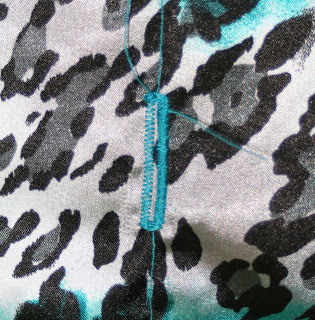 
The fabric:
I wanted a lovely silk or satin for this dress and something more 'me' so I choose this poly-satin turquoise animal print . As usual a little slippery to work with but hangs lovely. If you've never worked with satin before I would recommend this type of pattern as a good  introduction to working with satins as there is minimal fuss, the slight down side is the amount of fabric being used but you could always opt for the shorter version though!

Changes:
Mainly just narrowing the shoulders so it's not so wide to reveal my bra straps. I would also like to ark the hem line up  from the original length to my shortened version allowing it to drape longer at the sides. A wide ribbon belt in black would look nice I think to break the print up some what too!

A little tip with these kaftan style dresses and tops that have no shoulder seam; iron a little crease where the shoulder line would be, it helps the garment hang better and looks more professional


Have a lovely weekend!