on October 07, 2013
Finally I can tick leggings off my to-do list, I swear they've been on there for the last three years always getting bumped down, but I found some lovely stretch fabric that would work well with them giving me no choice but to whip them up!
I was going to cheat with the leggings by taking a a pair I already owned apart to use as a template, but good grief, they obviously were quite happy in there together state, they did not want to be unpicked and at one point I so wanted to rip them apart, and that's when I got my  pattern drafting book out and made the pattern myself! 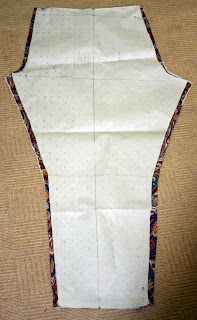 Pattern notes:
For these I just followed the drafting instructions, I added an extra inch and half on at the waist, because I wanted a wider, higher band than on RTW ones, and added a seam allowance onto the sides of the legs.
I used a tip I was taught to only add elastic to the back part of the waist band so the front lies flat. For the top stitching I used the stretch zig-zag stitch.

Side View
The Fit:
After trying them on mid make I need to take the back seam in few centimetres. The leggings were also baggy in the crotch area, more so in the initial fit before I'd hemmed the waist band. I've been having this issue for a while especially in RTW clothing but I put it down to the crotch needing to be higher, so I decided to try basting in a higher crotch, but it wasn't to any avail. I could see the bagginess could easily be eliminated by pinching it out and guessed that I could make that alteration on the pattern for next time, so I went and hemmed the waistband as normal. This actually relived the bagginess somewhat so after baffling myself I did some re-search on fitting problems.
It turns out I probably have a sway front! You can see in the side image above, that the front waist band is much higher than the back, this is what happens when the wrinkles form on the crotch and you feel the need to keep pulling them up at the front to get rid of the wrinkles and bagginess. It can be resolved by lowering the centre front 2 or 3cm, so this is what I intend to do the next time make them and I will let you know how I get on! I probably could of done it on this pair but because I'd already hemmed down the waist band I didn't want to unpick all those zig-zag stitches!

wear-ability test:
I wore these into work, and they were comfortable. The waist problem did become apparent towards the end of the day where I felt I was pulling them up more and more, I also feel the back could do with being pulled in and extra few centimetres for a more snug fit, but all in all a satisfy instant gratification make! They also wore better than the recent RTW leggings  I bought, which are awful, loose fitting, baggy and all-round terrible quality, so this makes me even more happy :)