on November 11, 2013
The bombshell dress project looked so promising. I was enjoying following the videos on craftsy (I swear it's the best way I learn). Assembling the muslin was going well, I was even enjoying doing the thread tracing which is something I thought I would hate, and although I knew I was going to need to do a bust adjustment that didn't faze me either.
What I wasn't prepared for was my muslin fabric stretching out of shape right in the part where I needed to make the bust adjustment!! 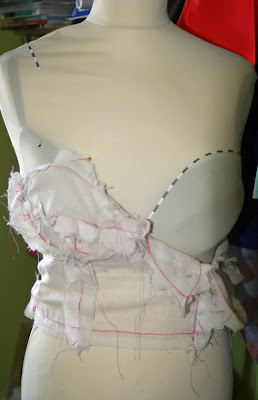 Looking Sexy, like a hot mess with the muslin on inside out and with just one boob!

Shit, Shit, Shit and triple Shit!
Unfortunately the bombshell muslin's been stuck on my mannequin ever since, I make that around 3-4* weeks now! The up-side is that I don't need to but more fabric for the project. A little rummage through my fabric box and I found some suitable fabric that hopefully won't stretch out of shape this time!

The muslin was planned to be done by now, especially as I've had the last two weeks off work, but nope my attention was demanded else where- decorating the kitchen, and glossing all the skirtings. Finally after having our house nearly a year the decorating is now mostly finished (thanks to me, as my boyfriend was working and left to him he wanted to do it over Christmas- No way!!) and it's fair to say I don't ever want to see a paint brush or paint roll in my life, ever again! Roll on more time for sewing.