Halterneck to Strapless to Skirt.... 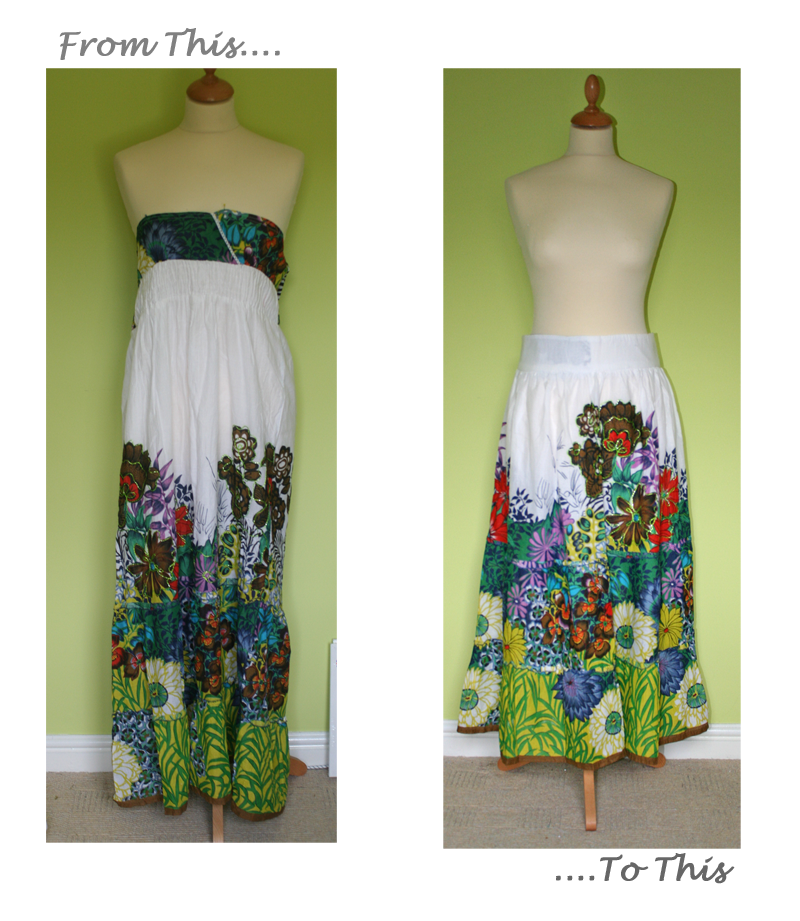 Whenever my mother goes away to somewhere hot I joke that she gets holiday head as she buy's things that she wouldn't normally look at twice. This 'dress' however an exception of sorts.

Bought in spain it started life as a halterneck. My mother doesn't do halternecks - her boobs are big and she self conscious about them, so for her halternecks are a no-no.
Now had you seen the size of the cups for this halterneck and my mums boobs you would have too laughed uncontrollably because there was no chance in gnats arse  her assets were going to fit.
'did you try it on' - ' no. it was too hot' - 'and what part of you thought that you'd get 'those' in there' ...and so the conversation went .... 'could you alter it' - 'yeah, like into a skirt or something' - 'hmm - no I was thinking just take away the straps, fold this under here and stitch it down'- 'hmm, yeah I could do or I could take away the halterneck part and add more sheering elastic?' - 'yeah but it would alter the length and I like it where it is!

Ok! Mother knows best........... two years later, she finally admitted that she can't see her self wearing it strapless, so would I possibly turn it in to a skirt keeping as much length as possible - good job she's short!

Nothing strenuous involved. unpicked the sheering elastic and cutting a waist band from that part. Gathering the skirt to fit the new waist band and adding an invisible zip, pretty much sums up what I did. 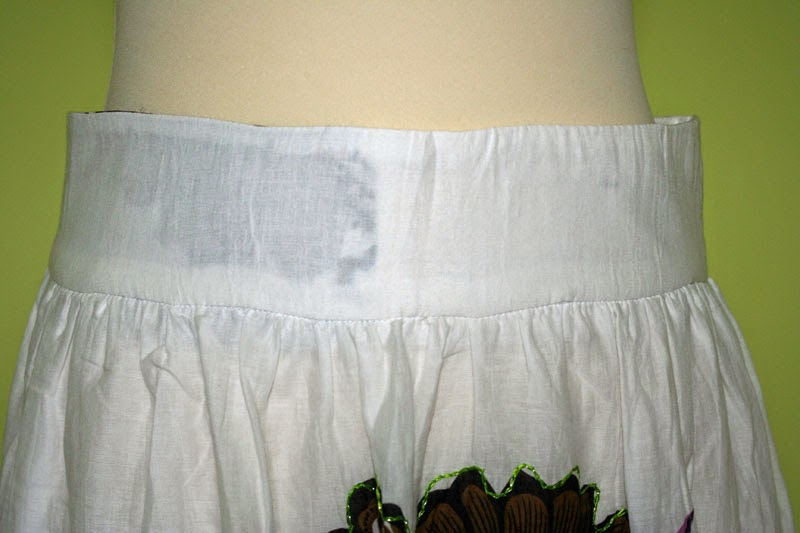 Although the panel where the sheering/halterneck had been had mostly enough fabric to create a waistband from, some of the print that had been on the top half of the dress had to be used to create the facing. Luckily it's on the inside, and although you can see the shadow in this image, my mother wears her tops over the skirt and not tucked in.... 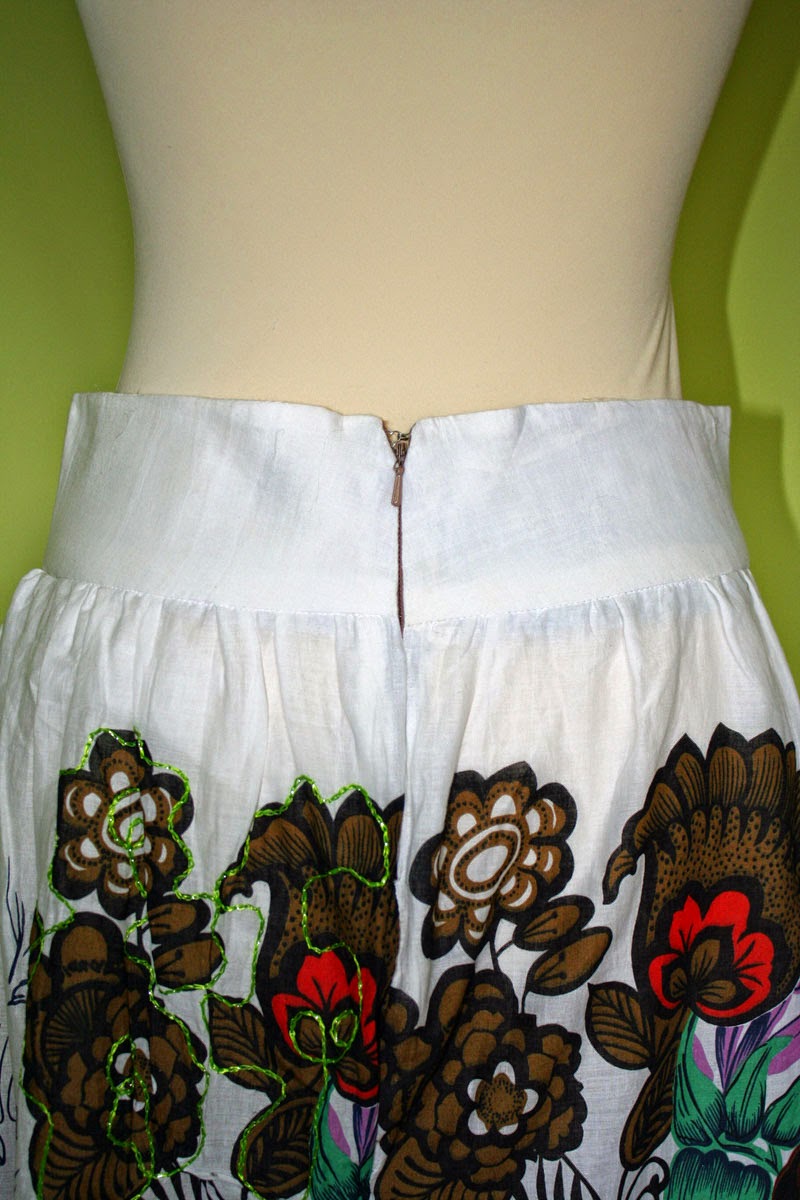 ....The same is said of the brown zip on white fabric. I stash busted as I knew it won't be seen. 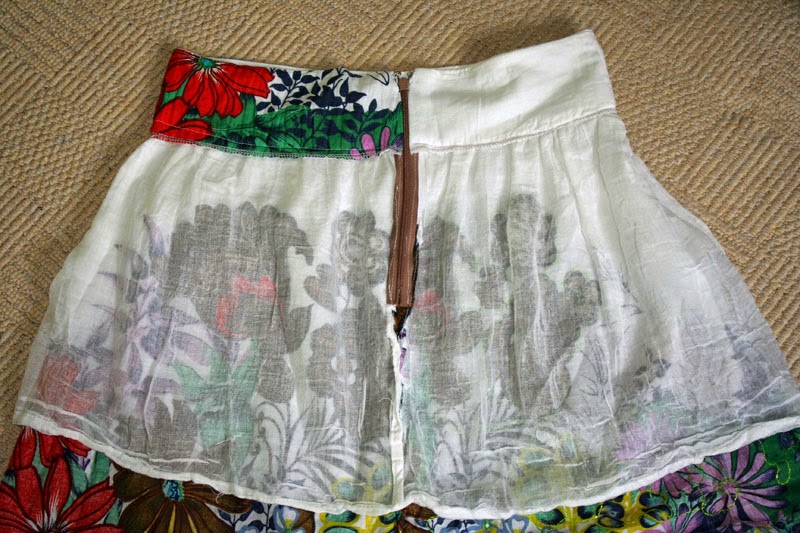 The dress was partially lined so I used what was left of it. The center back seams in the lining and fabric, where what I can only describe as being strangely welted but without being top-stitched, kind of like a weird french seam. Why Oh Why. I have no idea. The weirdly welted seam makes for an unsightly bump where the newly inserted zip ends but the skirts gathers are forgiving about it on the outside. 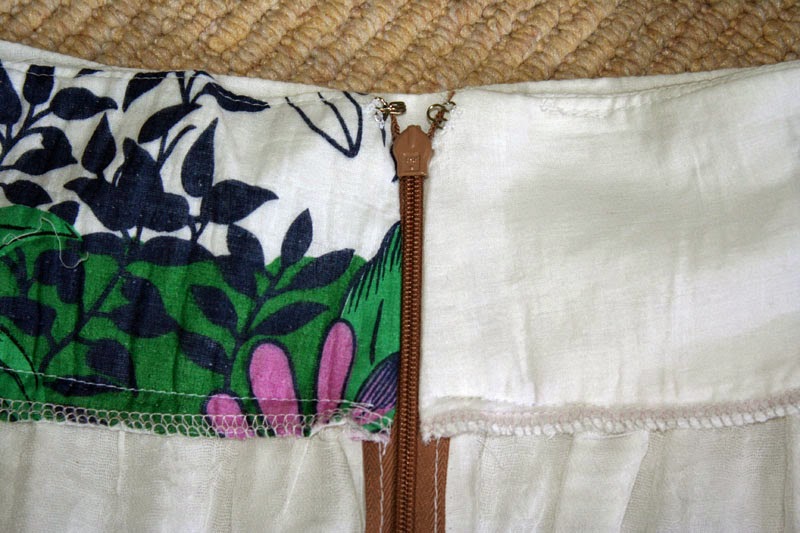 The good news is my mother is happy with the result. The not so good news was that when I did this for her at the beginning of August she came down with a rather nasty lingering bout of gastroenteritis leaving her with a very bloated tummy for weeks on end and unable to wear the skirt needless to say spring can't come quick enough for her.