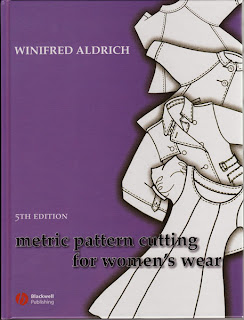 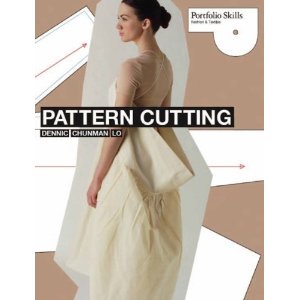 Having already owned the Winifred Aldrich pattern cutting book, I bought pattern cutting by Dennic Chunman Lo last week after reading Tilly's review from Tilly and the buttons. so I thought I'd give you low down....
This book is very good, and I would suggest it to anyone who wants to teach themselves how to pattern cut, don't get me wrong pattern cutting isn't particularly easy but it is manageable and do-able as long as you concentrate, it also gives you a double whoop feeling when you've not only sewing something yourself but created the pattern too!!  Back to the book. Personally I think this book is very beginner friendly and takes you through the pattern cutting process step by step with minimal fuss.
The book has lots of pictures and is clearly set out with easy to follow information and instructions. At the back there is a section at which looks at inspirational pattern cutting which gives plenty of good ideas to try and feeds the imagination of what you could create. Not only is this a pattern cutting book but it acts as a reference book too not just for those who can/want to pattern cut, but those who like to chop, change and alter shop bought patterns, the book gives pleanty of ideas for moving darts and shaping seams and has a good section on fitting.


So to the Winifred Aldrich book, this book is the one I use to draft my patterns from, but is very much a text book guide to pattern cutting i.e we used it in college where the teacher reads from the book and we did what she said! Upon saying that it does contain similar information to Chunman Lo's  book but isn't as comprehensive. Ideally to purchase this book you really need to know a bit about pattern cutting, although in in a way these two books go side by side together.

The Winifred Aldrich book not only shows you how to draft the patterns but provides plenty of pattern adaptations, including pattern cutting without darts and for use with jersy and knit materials. It gives you options to do different collar shapes, waist bands and sleeves and gives both trouser and jeans adaptions. The down side is the variations on the dress's skirts and tops are rather dated and not very inspirational  (well the book was first published in 1975!!) oddly I think it's worth pointing out that if you bought the Chunman Lo book first followed by the Winifred Aldrich book then you would feel a slight disappointment, but if like me you purchased the Winifred Aldrich book first followed by the Chunman Lo's then I think you would feel  you have gained something and what one doesn't give you the other does. As such the Winifred Aldrich book gives you a list of pattern cutting tools, where as the other book not only lists them but photographs them too so you know exactly what your looking for, as for the Winifred Adrich book it gives you patterns for adapting blocks in to coats, capes and leotards if you so wish which is something the other book doesn't.

All in all two very good books for beginners but pattern cutting by Dennic Chunman Lo is defiantly your book if your a complete newbie and want to teach yourself to pattern cut. whereas the metric pattern cutting for women wear by Winifred Aldrich is more of a supplementary book especially to someone who already knows a little about pattern cutting.